Posted on 22nd March 2017
William Crombie Howie, 25th April 1928 - 18th March 2017.
Bill Howie was born in the, “....Kingdom of Fife,” on 25th April 1928. His paternal grandparents were yeoman farmers but with their untimely death the family was dispersed, Bill's father being sent to an orphanage. His maternal grandfather was a master tailor and had been a scout-messenger for Baden-Powell during the Boer War.
His father served with the Argyle and Sutherland Highlanders during the 1914-1918 War and on demobilisation became groundsman to Sir Michael Nairn on the Ravenscraig estate where Bill was born in West Lodge on the Ravenscraig farm. His father became Junior Deacon of Oswald of Dunnikier Lodge, Kirkcaldy, prior to his untimely death when Bill was seven years of age.
Bill was educated at Viewforth Secondary Modern School in Kirkcaldy and his education being ended at the age of fourteen, he found employment initially with the Forestry Commission and later, the Edinburgh Parks Department. Having continued his education by means of evening classes, he eventually was appointed as a Trainee Assistant Superintendent at a boys home in Edinburgh. He was eventually successful in qualifying in a Scottish Home Office Childcare Course at Glasgow University in 1957 and was appointed Superintendent at the Remand and Psychiatric Observation Centre in Kirklands, Ayrshire, where he met his future wife, Margaret, who eventually was appointed Matron at that establishment.
In 1961, Bill was appointed as a Probation Officer in the Durham Probation Service in Harlepool. He continued with part-time education at Leeds University and was eventually appointed as a Tutor-Officer in 1964. He then completed a Specialised Sociology Course with Sussex University in 1970 maintaining an interest in criminality and mental health. Having been appointed a Principal Social Worker for the newly created Hartlepool Social Services Department in 1972; he eventually became a Senior Area Officer. His final appointment was Principal Assistant County Advisor for Mental Health, during which time he became the Liason Officer for the District Health Authorities, serving on three national working parties and with, 'Mind,' the national mental health organisation.
Bill was a keen bowls player, often representing at county level tournaments, eventually becoming Durham County President, playing at national and international level. He maintained a deep commitment to English Freemasonry and became well-known for his research and as a lecturer. He became involved with the Canonbury Lectures, instigated by the Marquis of Northampton, a former Pro-Grand Master of English Masonry and also became a member of the Irish Lodge of Research Number 200 and made many friends amongst the members of the Irish Constitution, eventually becoming a member of the Grand Master's Lodge, meeting in Dublin. Bill also renewed the family ties with Scottish Freemasonry, becoming a member and eventually Master of Lodge Hope of Kurrachee, which had reformed in Scotland from Pakistan.
Bill was able to take early retirement in order to care for his wife, Margaret, who had become chronically ill. After her death he maintained close contact with his sister who lived in Glenrothes in Scotland and was able to renew many of his Scottish contacts. He was also able to deepen his understanding of both the Western and Eastern Esoteric Traditions, particularly in his greatly valued initiation and progress in a genuine Japanese Reiki order. Anyone was extremely fortunate indeed to experience a Reiki session conducted by Bill, who was an acknowledged expert in that particular esoteric discipline.
In March 2012., Bill was admitted into the Order of the Fleur-de-Lys as a Companion and his commitment to the Order was later rewarded by his appointment by the Sovereign Grand Commander as Knight of the Lys.
II.
Bill derived a great deal from his membership of the Order and was active in the Durham Company and Nationally. He never missed a national investiture at Queens' which he considered one of the highlights of his year.
Bill proved to be a loyal and devoted friend who quietly attempted to live out his commitment to the ideals of chivalry and the Esoteric Tradition. He is sadly missed by both his Brethren and Brother Knights.
A. T. Coote, KGL., KCStJA. 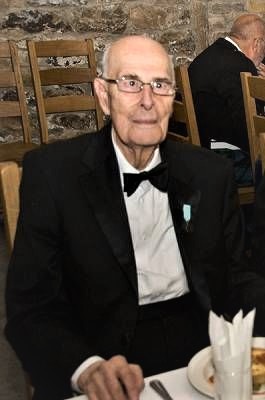