Posted on 18th August 2017
Victor Alan Cyril Reece always called Alan died suddenly on 17th August 2017 whilst on holiday.
Alan had a distinguished career as a medical officer in the navy. He graduated from Newcastle University with a BSc MBBs and was a Fellow of the Royal College of Surgeons and a Founding Fellow of College of Emergency Medicine.
Alan was born on 14th January 1945 and joined the Royal Navy in 1981 as a Surgeon Lieutenant rising quickly to Surgeon Lt. Commander the next year and was promoted to Surgeon Commander in 1989, becoming Principal Medical Officer in 1997 having been medical Officer in Command NATO Exercise 1992.
He joined the Order of the Fleur- de-Lys on 26th March 2011 in the rank of Knight (KL) and was promoted to Knight Commander (KCL) on 9th April 2016. He was also a serving brother of the Venerable Order of St. John of Jerusalem.
Because of his interest in and knowledge of Heraldry he was made Grand Pursuivant in 2012 and Grand Herald a year later. His own Arms were granted by the College of Arms in 1998 and during his time as Grand Herald he created many interesting Armorial Bearings for members. His own motto was RESURGENT (Bring back to life) which for a doctor working in Emergency medicine was most apt.
His humour and no-nonsense approach to life will be greatly missed.
Sovereign Grand Commander
Most Noble Chev Prof Comte Hugh de Montgomery
KSGL, GCStJA, PROrdM, PhD, FSAScot 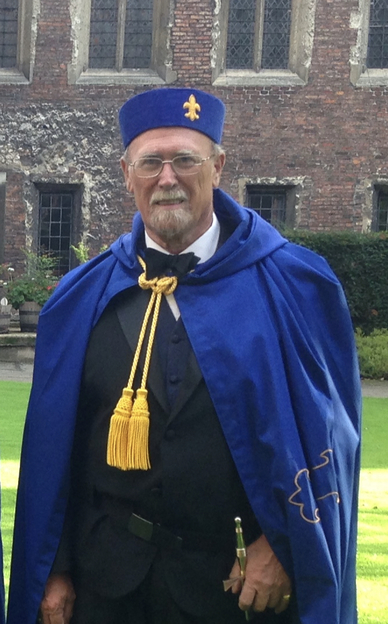