Posted on 18th December 2019
Guy Leo Maria Fosté was born on 28th September 1954 in Wilryk (Antwerp) in Belgium.
He trained as a Mechanical Engineer and design draftsman and worked as such for several Belgian companies before moving into marketing and communication.
He served in the Belgian Army and held the 1st and 2nd class decorations as well as the Gold medal of the Order of the Crown of Belgium.
In 1984 he obtained his private pilot’s licence and in 1986 qualified as a commercial pilot with Sabena, the Belgian airline.
He was also an artist and from 1995-2000 served as director the Flemish academy of impressionists. He played the Great Highland pipes as well as the Uillean pipes, the low pipes and Bodhran.
He joined the Order in 2010 and became the Sovereign Grand Commander’s personal piper in 2011. Apart from being my personal piper, he turned up to most company musters to pipe, all at his own expense and contributed considerable funds to the Foundation from his piping exhibitions.
Additionally he came over to pipe me in as Mayor of Uttoxeter at my civic service even though he was suffering considerable pain from cancer, which he did not disclose until some months later. Early in 2015 he was formally adopted into the Comber branch of the Montgomery family and he added the additional surname of Montgomery becoming Guy Fosté de Montgomery by deed poll. For all his work for the Order and his devotion to duty he received rapid promotion eventually becoming Assistant Sovereign Grand Commander for Europe.
Guy also stood at the cradle of the creation of the Belgian Company.
Of everyone I know Guy was one person who lived by Tenets of the Order. He put Honour above Self and Duty above Wealth. HRH Princess Elizabeth called him “That great personality and devoted Knight”.
Sovereign Grand Commander
Most Noble Chev Prof Comte Hugh de Montgomery
KSGL, GCStJA, PROrdM, PhD, FSAScot 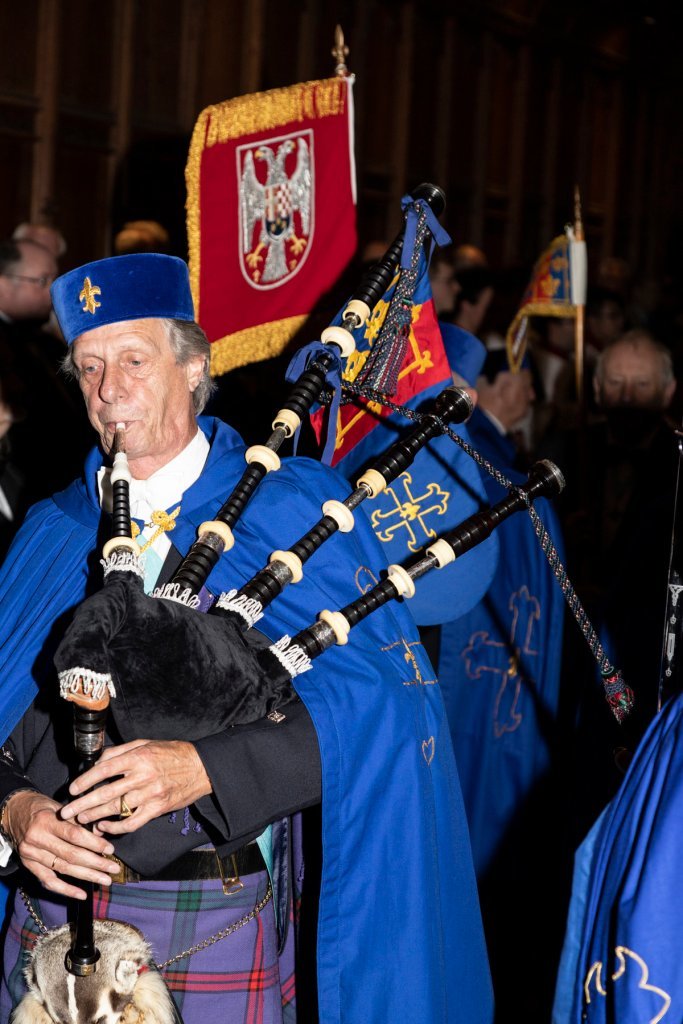